Jobs And The W-2 Economy

What should we do about jobs? How can we create good jobs for everyone?

One part of the discussion should obviously be focused on facilitating those who work in the emerging “1099 economy” and explore what that might be accomplished in the way of meaningful and reasonably-compensated work.

If we recognize that work of freelancers and entrepreneurs is increasingly separated from jobs in the traditional sense and provide proper support to these people, an increasing number of people will be able to piece together work from a series of “gigs”—the “Jobly” solution, where the right credentialed people do a specific and named scope of things.

Yet the economic prospects of this 1099 world are not necessarily improving. Thus young adults launched about 40,000 fewer new businesses a month in 2013 compared to 1996. .

The overall scope of this 1099 economy, though a matter of the discussion, is still relatively small. “The number of self-employed people as a percentage of the workforce,” according to the Washington Post, “has remained fairly constant for decades, at about 10%.” Other estimates put the figure somewhat higher.

Whatever the correct figure, traditional jobs will remain the main source of work for most people for the foreseeable future. So the question of “creating good jobs for everyone” must inevitably involve consideration of what can be done about the “W-2 economy.”

Jobs in the W-2 economy

One set of problems in the W-2 world is the quality of the jobs. Only one in five workers is fully engaged in his or her work, and only one in ten truly passionate. Many of the new jobs generated in the start-up world are high stress and short duration.

Another set of problems is the decline in the availability of jobs. Firms older than five years have been net job destroyers over the last 25 years.

One factor behind this is that, as David Nordfors points out, the average lifespan of an S&P 500 company has shrunk by 50 years over the past one hundred years, from 67 years in the 1920s to 15 years today.

But why? Why are big corporations dying so rapidly?

An increasingly obvious reason is that these big publicly owned firms are being managed in an obsolete manner and can no longer cope with the emerging Creative Economy.

The world of 20th Century management, which is still pervasive in large publicly owned firms, is vertical. Its natural habitat comprises tall buildings in places like New York. Its mindset is also vertical. “Strategy gets set at the top,” as Gary Hamel often explains. “Power trickles down. Big leaders appoint little leaders. Individuals compete for promotion. Compensation correlates with rank. Tasks are assigned. Managers assess performance. Rules tightly circumscribe discretion.” The purpose of this vertical world is self-evident: to make money for the shareholders, including the top executives. Its communications are top-down. Its values are efficiency and predictability. The key to succeeding in this world is tight control. Its dynamic is conservative: to preserve the gains of the past. Its workforce is dispirited. For 25 years, these firms have been net job-destroyers. These firms have a hard time with innovation. They are being systemically disrupted. Its economy—the Traditional Economy—is in decline.

The shift to the Creative Economy

The reasons for the shift to the Creative Economy are well-known: globalization, deregulation, and new technology, particularly the Internet. The Internet changed everything. Power in the marketplace shifted from seller to buyer. Suddenly the customer is central, not something you could take for granted. Now the new norm is “better, cheaper, faster, smaller, more personalized and more convenient.” Average performance isn’t t good enough. Continuous innovation becomes a requirement.

The transition began at the individual team level. Instead of individuals reporting to bosses, self-organizing teams were used to mobilize the talents of the staff to deliver new value directly to customers. The manager became an enabler of the team rather than a controller of individuals.

Then ways were found to scale the same basic concept. By having a platform, Apple for instance is able to achieve massive scale, with hundreds of thousands of developers devising every conceivable App to meet the infinitely variable needs of hundreds of millions of customers. As a result, each one of those hundreds of millions of customers has a product that is individually customized to meet his or her own special needs and wants. This is something that vertical management couldn’t conceivably accomplish. (Interestingly, this is a mix of the W-2 economy and the 1099 economy: they are mutually supportive.)

The core idea is not just a new process or methodology, but a different ideology–a different way of viewing, and acting in, the world. Instead of an ideology of control with a focus on efficiency and predictability and detailed plans and internal focus, it’s an ideology of enablement, with a focus on self-organization, continuous improvement, an iterative approach, and above all, an external focus: the customer is now central.

Instead of money being the focus, people and their needs are now central. Yet ironically, this way of managing makes much more money than management focused on making money.

Forward-looking thinkers in management now recognize the need for fundamental change. In 2014, a report from the Aspen Institute showed that a cross-section of business leaders, a majority, particularly corporate executives, agreed that the primary purpose of the corporation is not to maximize shareholder value, but rather “to serve customers’ interests:.”

Change is being strongly resisted by the powers-that-be, as long-standing attitudes, values, assumptions and vested interests support and defend the status quo.

Yet the economics are forcing change. The old way of managing is becoming less and less productive, and existing business models are being systematically disrupted.

The economics are inexorable. John Hagel’s Center for the Edge has shown that once you get behind the booming stock market, built on cheap government money and various kinds of financial engineering, you find that the rates of return on assets and on invested capital of US firms have been on steady decline since 1965. Firms which are run in the old way are being put out of business. The options are basically: change or die. Some firms are opting to die. But the change will happen regardless. 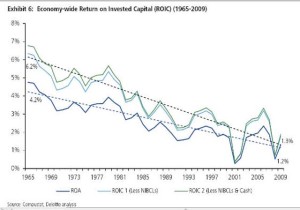 So the question is not whether the transition to the Creative Economy is going to happen. It’s when. The question is: will the change be agonizingly slow and ugly and bloody, with horrible social costs in terms of lost jobs? Or will it be quick and elegant and intelligent, with good stable meaningful work for many?

From the point of view of the economy, Geoff Moore points out “Coase’s Law is the right frame of reference.  Commoditized work will migrate to its lowest transaction costs.  Differentiated work, by contrast, will migrate to its highest effective outcomes.  Over time, everything differentiated becomes commoditized, which then frees up energy to pursue the next vector of differentiation.”

From this economic perspective, major corporations, through their adherence to hierarchical bureaucracy and their consequent inability to innovate, are pursuing the losing strategy of trying to make a living from increasingly commoditized work. This accounts for their declining life expectancy.

But the inevitable migration of differentiated work, i.e. innovation, to its highest effective outcomes can happen in two very different scenarios.

One scenario—the current one—with high social costs and loss of jobs is the accelerating death of existing corporations due to an inability to adapt to the new economy and the eventual birth of a new set of organizations that can cope.

A more intelligent scenario would be for major corporations to change the way they are being managed and master the skills of the Creative Economy. I believe that we should mobilizing efforts to generate the latter scenario.