“Disrupting Unemployment” (on Am 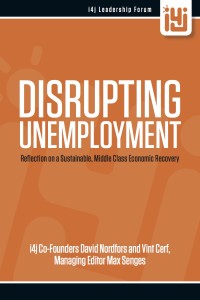 azon) by i4j co-founders David Nordfors and Vint Cerf, along with  managing editor Max Senges published by the i4j Leadership Forum and the Kauffman Foundation, has been released.

A job is a need. Innovation for jobs is a market.

In the world’s existing, task-centered economies, the aim is to minimize the cost of tasks through innovation that helps customers spend better, yet–a growing paradox–with people in manufacturing or service jobs replaced by machines. But people need to earn in order to spend. In a people-centered economy, designed to increase the innate value of people, a job is a customer need, as in when people say “I need a job”–paid work with a steady, reliable income, enabling people to raise families and live a decent life. Employment is the standard way of satisfying the customer’s need for a job, but innovation is opening many more possibilities. There is a market for innovative companies to offer customers good jobs where they earn better, in more meaningful ways. Thus what is widely seen as a current problem becomes instead a powerful, emerging opportunity for entrepreneurs: to transform underused human capacity into wealth distributed much more widely and evenly.

Five billion customers want a good job. 200 Million have one.

Of the five billion world citizens of working age, three billion want to work; most of them want a steady job, but barely a billion have one. Of these,, only two hundred million (13%) are ‘engaged’ (meaningfully involved) in their jobs. For every engaged worker, two hate their jobs and the rest are indifferent. This sad world workforce creates $75 trillion of market value (GDP) each year.

“Disrupting Unemployment” postulates that innovative companies can help everyone find a job that matches their skills, talents and passions, teamed with people who engage them, finding mutual opportunities for what they do best. How much more value would five billion well-matched, inspired people create vs. today’s two hundred million engaged workers accompanied by four hundred million angry ones? A doubling in world GDP ($75 Trillion) is a conservative estimate. Add to that the increased well-being of people having a job and a team that engages them.

From pipe dream to real potential

Beyond the difference in self-actualization, well-being and sense of meaning, the concept of providing all earners with ‘tailored’ jobs has been science fiction. Smartphones, cloud computing, big data and other emerging technologies are making it possible. Summoning an innovation-for-jobs ecosystem around this vision, many companies are already linking recruiting, education, coaching, skills, matchmaking, HR and opportunity-creation in a long-tail labor market. We tested this in January with great success, and will continue to facilitate the innovation-for-jobs ecosystem, with entrepreneurs – both social and commercial, funders, policymakers, educators, experts

Posted in Books, i4j Innovation & Jobs, Publications, Where to Start

David Nordfors is CEO and co-founder of IIIJ and the chair of the i4j Summit. He was previously co-founder and Executive Director of the Center for Innovation and Communication at Stanford University. He was one of the World Economic Forum Innovation 100 in 2009, and has served on WEF Global Agenda Councils. He serves on advisory boards of the Poynter Institute, Discern Investment Analytics and Black & Veatch. He is an adjunct professor at IDC Herzliya in Israel, a visiting professor at Tallinn University, the Tecnologico de Monterrey, and the Deutsche Welle Akademie. He was advisor to the Director General at VINNOVA, the Swedish Agency for Innovation Systems, where he co-initiated the national Swedish Incubator System and set up a bi-national R&D fund between Sweden and Israel for mobile applications. He was Director of Research Funding of the Knowledge Foundation, KK-stiftelsen, administering an endowment of $300MUSD, building a funding framework underwriting over a hundred innovation initiatives between universities and industry. He initiated and headed the first hearing about the Internet to be held by the Swedish Parliament. He has a Ph.D. in physics from the Uppsala University and did his postdoc in Theoretical Chemistry in Heidelberg, Germany.
Scroll back to top